I fear I will not have time to do justice to every build I have done.

Here are a few I have made for other people recently.

This is a clone of the Sustain Punch Creamy Dreamer. Jude from the band To The Bones wanted something to replace her MXR distortion plus, and this fits the bill nicely. She borrowed my Dreamer and loved it, so I made her a replacement for keeps!

The case is a red Hammond pre-fabbed one, and I used toner transfer for the graphics. I love the understated look, and it reminds me of older D*A*M stompboxes. 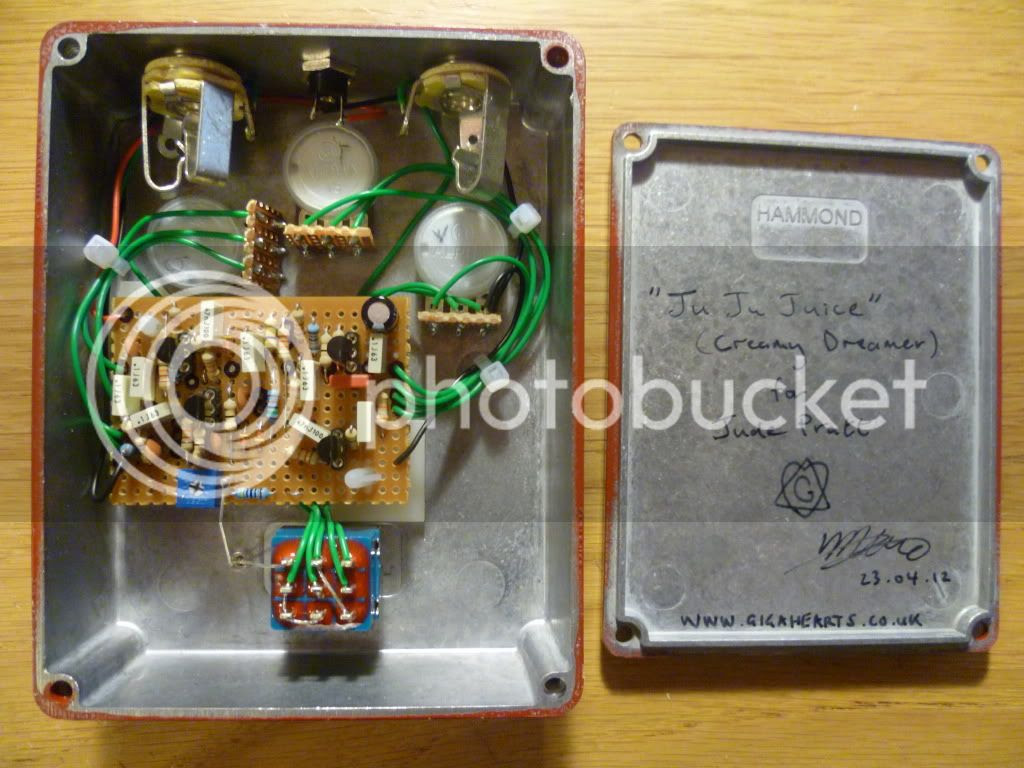 Sounds absolutely banging and looks beautiful. Jude was totally stoked with it. 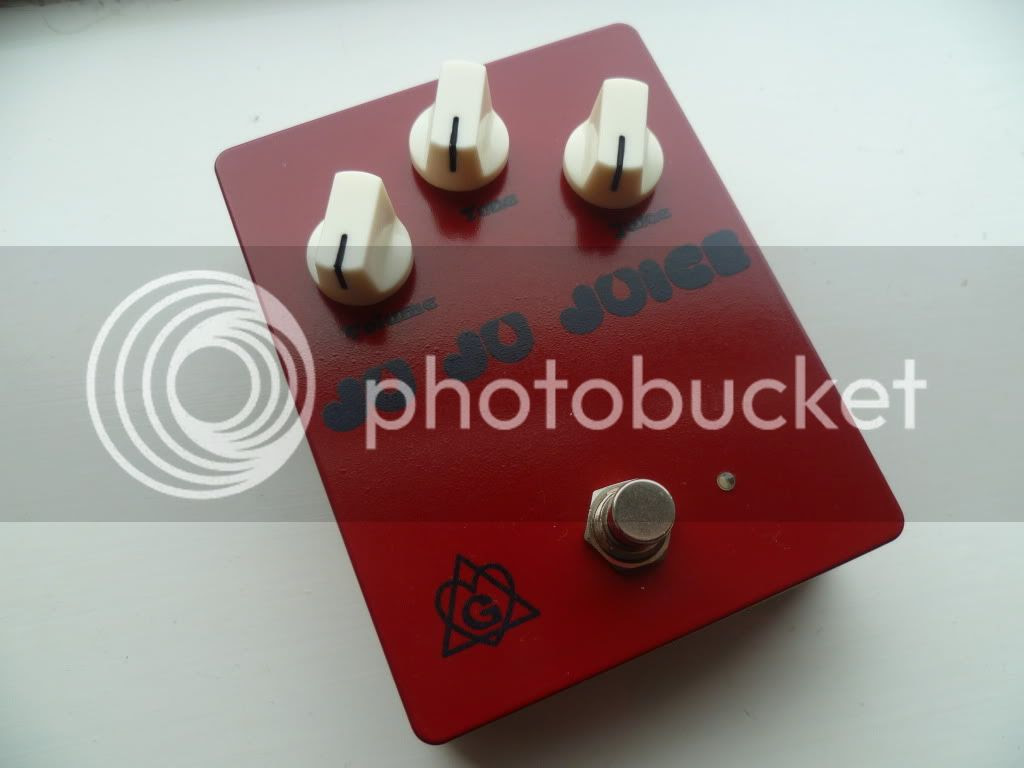 I have an ongoing relationship with an amazing guitarist called Gee who sadly lives in London. Otherwise Im sure Id pester him a lot more. Anyway, I have built a bunch of pedals for him. This is the latest one. Its a hotcake, built on a nice pre-fabbed board from a member of the Madbean community. This build was also using a pre-coloured Hammond case, this time light grey.

Gee just wanted my logos on it, otherwise plain, and a white LED. So I obliged! Also I used a 3PDT footswitch board in this build, which makes things look oh-so-professional. Sounds super nice. Geek out moment - I managed to source some vintage rare RCA 741 "tin can" IC chips, which are perfect for this project! 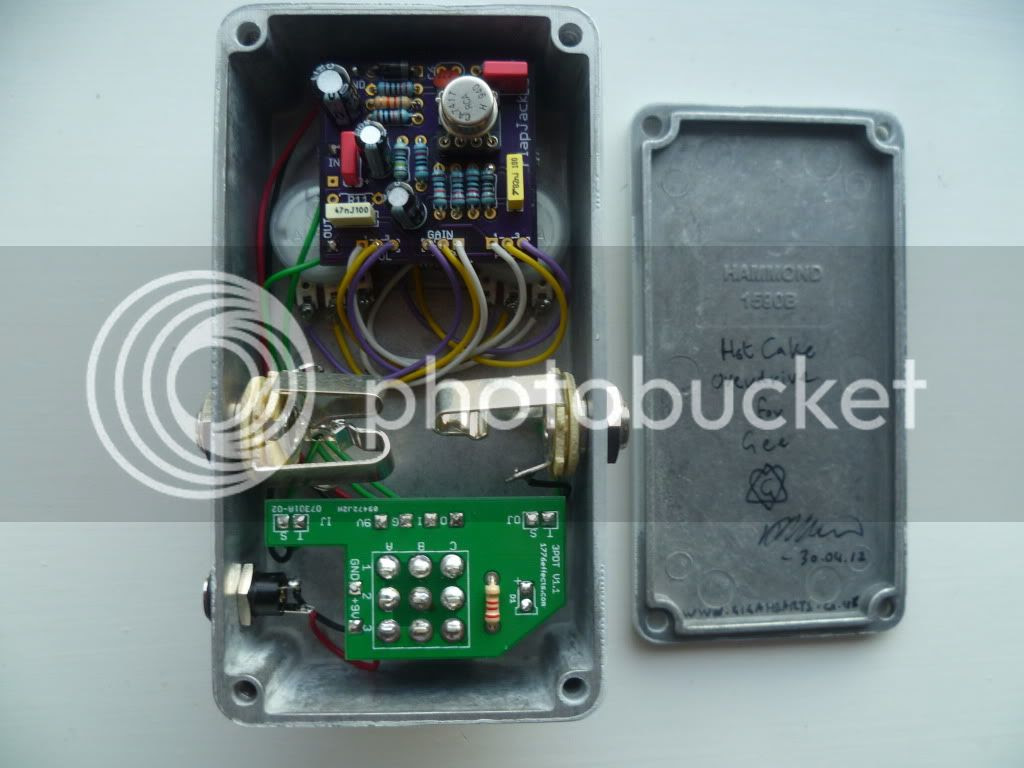 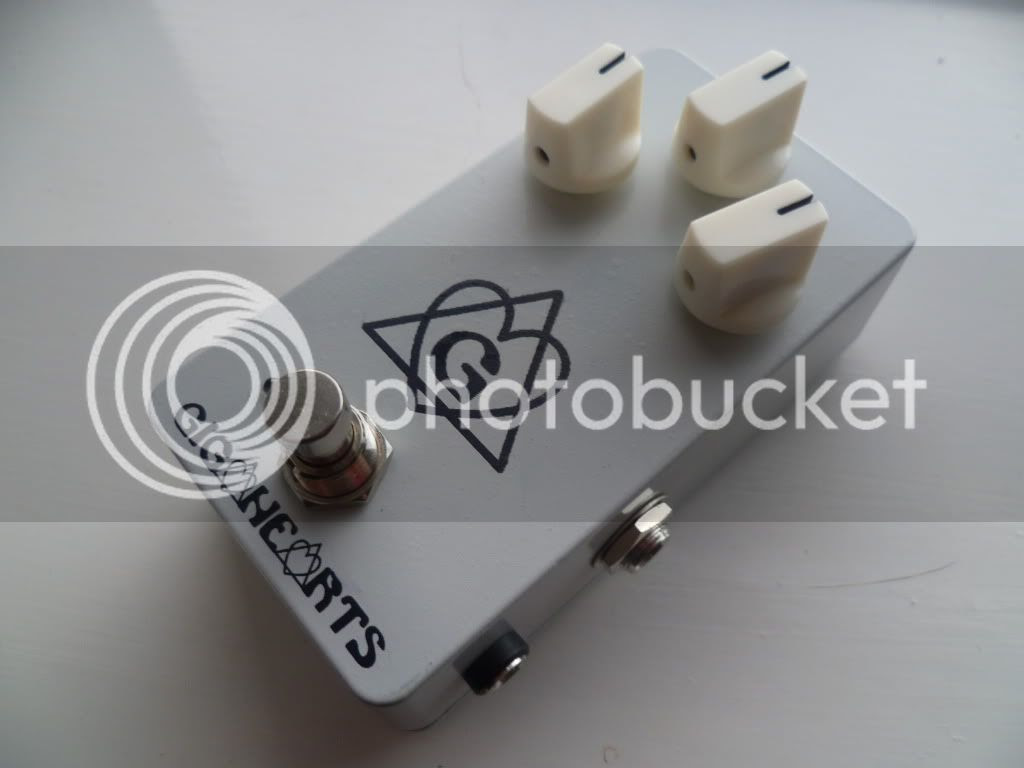 Another one for Gee. Cant imagine why anyone would pay £200 odd for one of these on the vintage market, but apparently they do. I managed to source a reproduction PCB, as well as a vintage RCA opamp for this build. There is very little to it, but its sounds so nice. I was actually remiss to part with this. LOADS of clean boost on tap, and whacking the gain gives a wonderful open crunch. Gee is a lucky guy. Damn him ;) Ah well I have too many pedals and doing this helps fund some of my own experiments.

Pretty simple this one. Again it used the footswitch board. 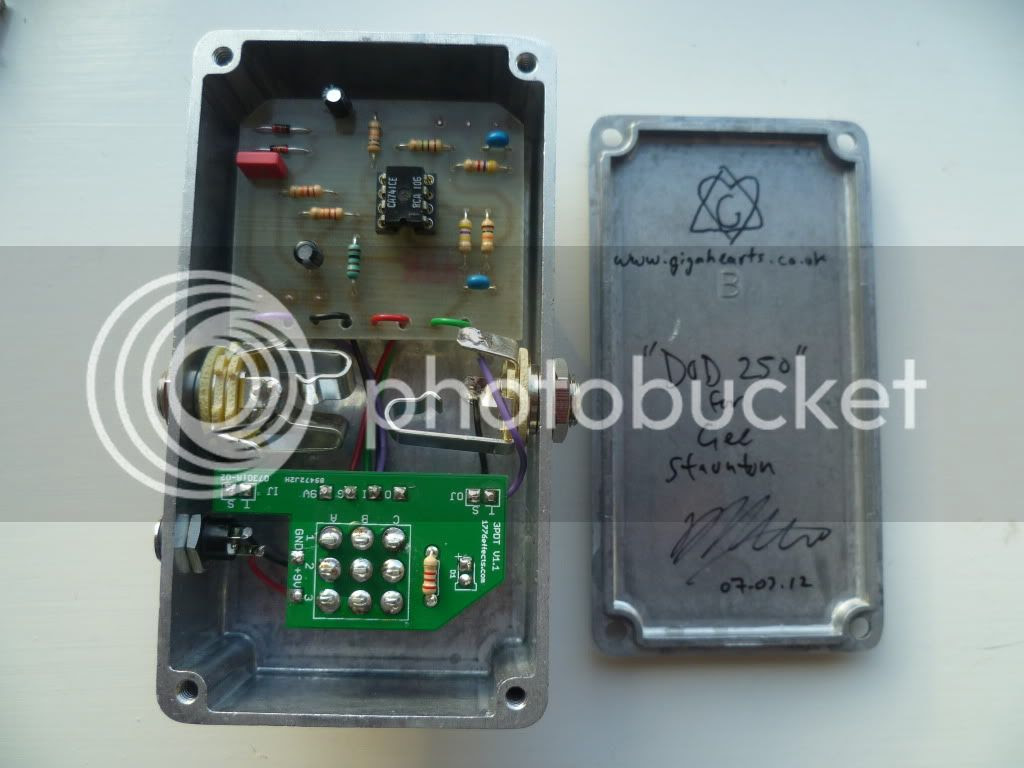 This time a simple silver case and yellow LED. 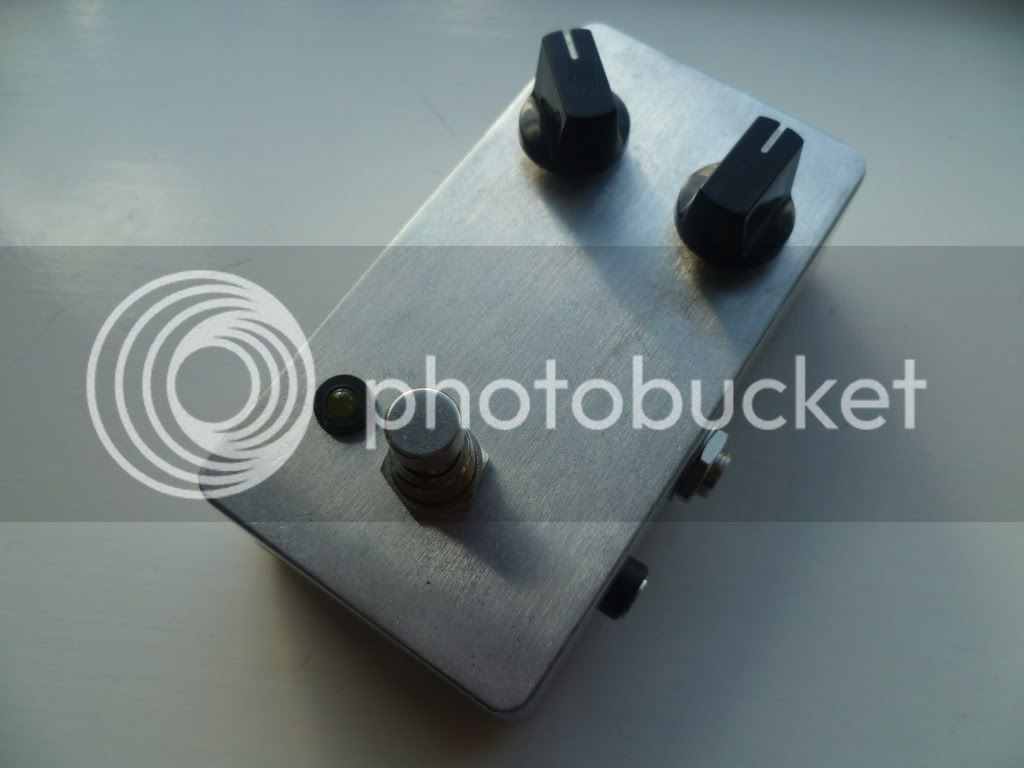 This is one for myself. Using the version 3 Pork Barrell project PCB from Madbean. This is a stripped down chorus (none of the mods of the version 2 which I have also built). It features a rate LED which blinks in time with the speed of the chorus. Sounds so nice, instant Smiths. Instant 80s. Hence the name. Also my birth year. I love this pedal so bad. Features a vintage Panasonic MN3007 / MN3101 bucket brigade chipset. Perfect. This one is a pretty densely populated PCB, akin to the Deluxe Memory Man PCB. 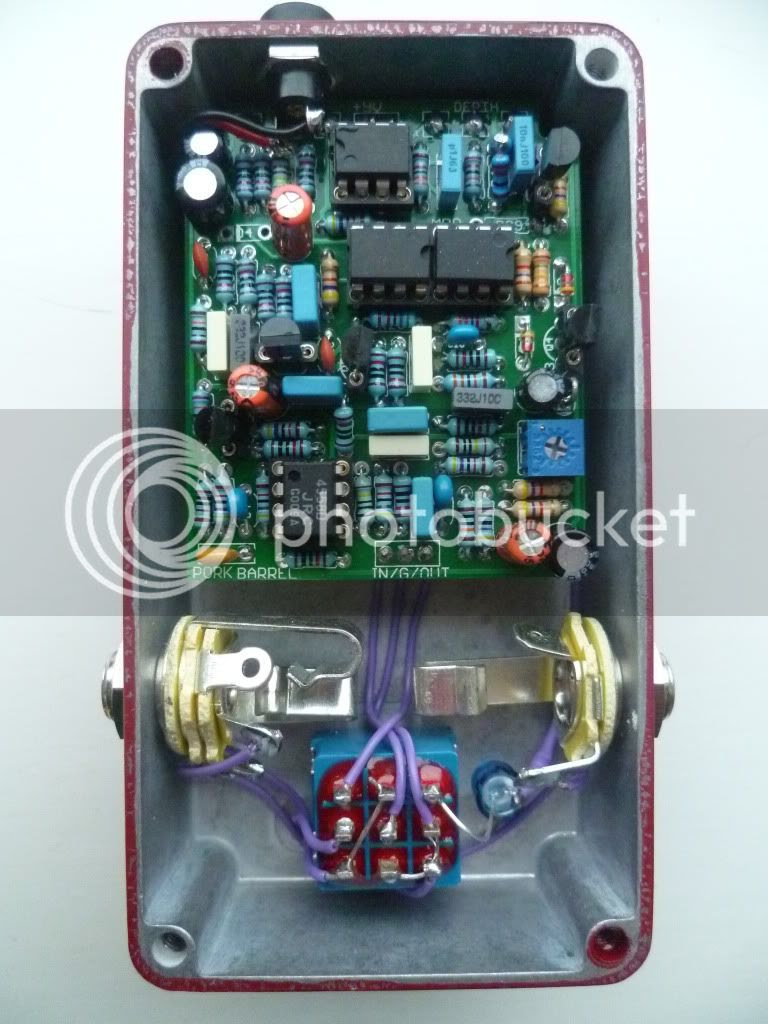 And for the outside I kept it simple. Press n Peel blue leaves a nice blue tinge which can be removed but I felt it worked well with the colourscheme :) Coulda been better aligned on the Gigahearts sign but nevermind ;) 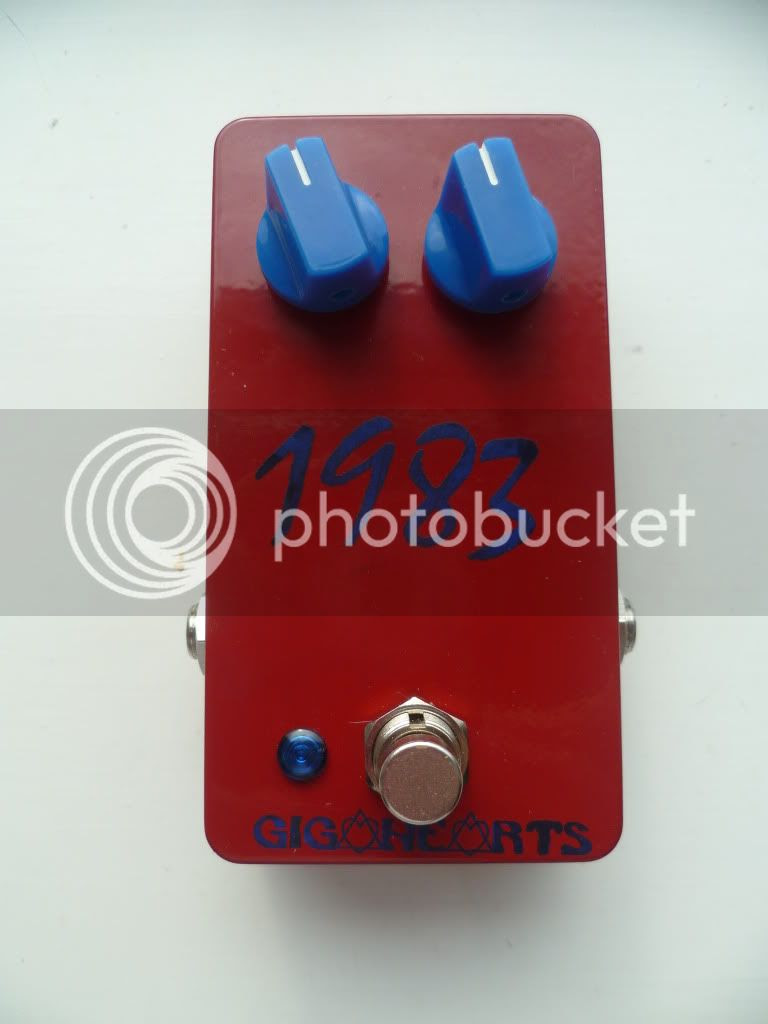 Ok lets end on another Vero project. I met up with a chap called Seb from up and coming band Young British Artists. He was keen to get a fuzz pedal built and was particularly in love with the sound acheived by Brian Eno on his seminal recording Here Come the Warm Jets. Turns out he used a WEM project V.

This is an 8 transistor fuzz pedal (!!) Luckily and by coincidence, this was being traced on FSB at the time, and a vero layout was produced. I subsequently Improved the vero for my own use. This is a great pedal, with lots of fuzz tones achievable from muffy tones to tonebender or fuzz face types. You can also get some nice abrupt sustain for broken speaker type sounds.

Overall, bonkers and lovely. This was housed up in an oversize case, something Seb wanted but the build itself almost necessitated. Keen eyed will see a cute trimmer used for the LED brightness so it can be set to taste. 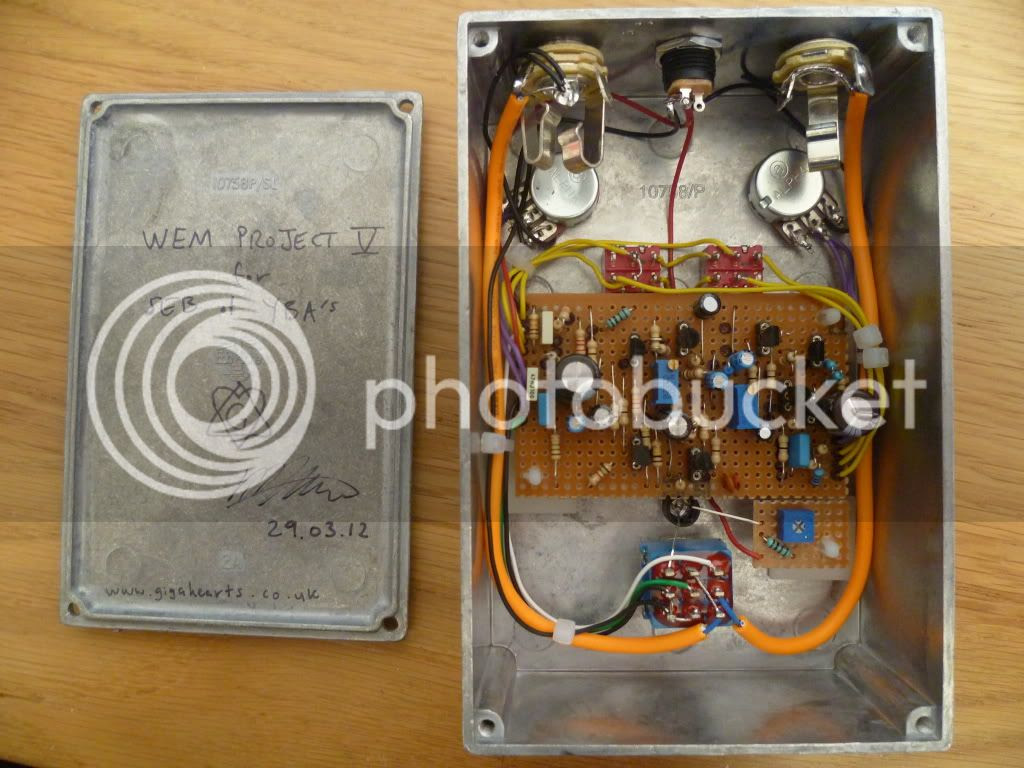 The outside is awaiting a contribution from a local artist, so for now it looks like this. I like the vintage type chicken head knobs on this one :) 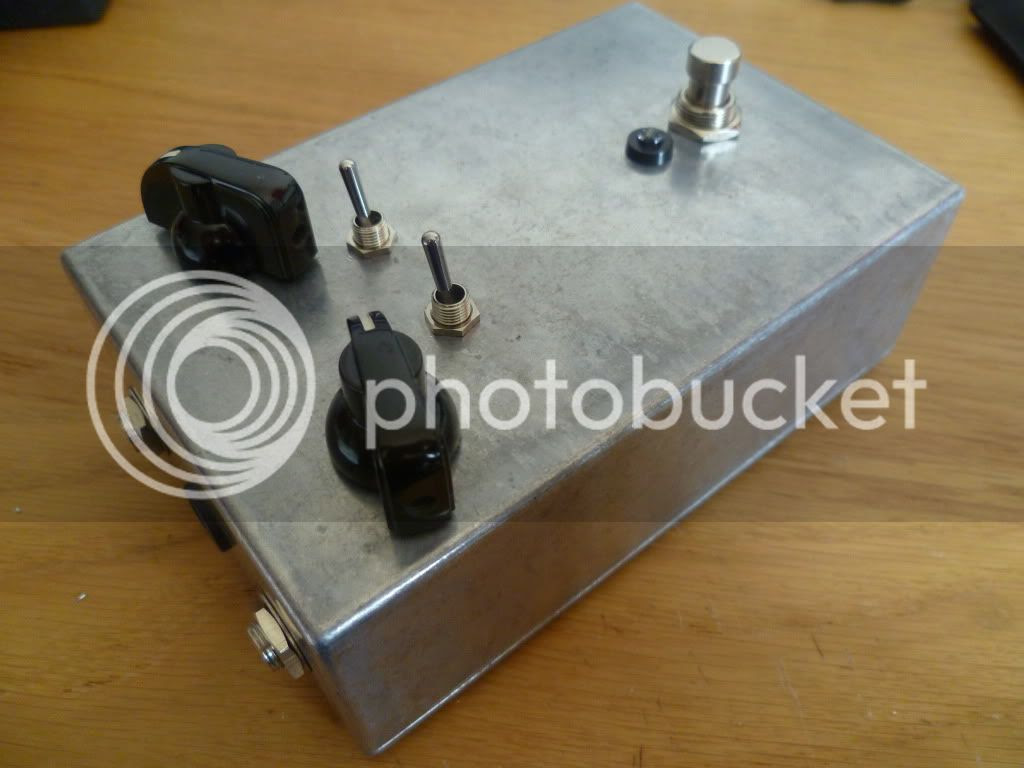 Well hello again. About time I wrote about my Aqua Puss pedals. I was able to source two New-Old stock MN3005 chips from eBay. I was also able to source 2 New-Old Way Huge Aqua Puss PCBs that were developed by a gang of awesome folk over at FreeStompBoxes.org What is an Aqua Puss? Only one of the most revered analog delays ever made. Basically an audiophile clone of a Boss DM-2, it is famous for a really splendid slapback as well as lovely filtered analog repeats and the most awesome feedback-y swell-y noise-swooshes. Basically its awesome. They reissued them recently but they dont use the old hard to find Bucket Brigade delay chips from Panasonic. They use reissue BL or Cool Audio type chips (from China) and are not as nice sounding. Check this Youtube video for evidence: http://www.youtube.com/watch?v=-lQfcIDS7OA

Mk1
This was built using the version 1 board from FSB. It requires a couple of ground connections jumpering. The pedal was completed 4th Decemeber, which shows how long it is since I updated - sorry!
The PCB is an attractive blue colour. Biasing the pedal was a breeze.
Cant tell how much of a buzz it was that it fired up first time.
Analog delays are one of the hardest pedals to make succesfully as a DIY-er.

Mk2
This was built using the final version of the FSB board, and this time it was red, and required no corrections adding.
I used pretty much all the same parts, but I had all the same type of trimmers for the OCD amongst us. Again, fired up first time. To this one I added a modulation board (on vero) which allows chorus and vibrato effects like a Memory Man.
Finished this one on the 1st March. Evidence for how long it takes to source a proper MN3005 chip!


Here's the ever popular gutshot 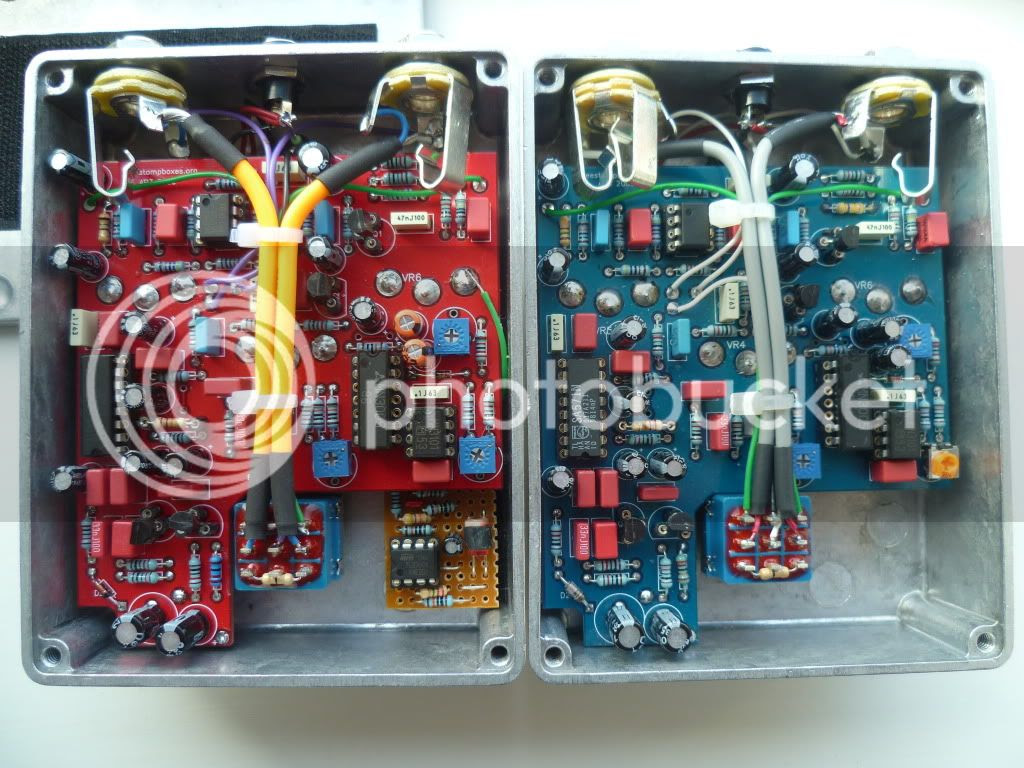 And for the outside I left it plain until today, when I have decided to add some decals using a toner transfer method. Not the cleanest, but I think it fits the vibe. Here is the Mk1 as it stands today. The Mk2 is the same but no decals and two extra knobs :) 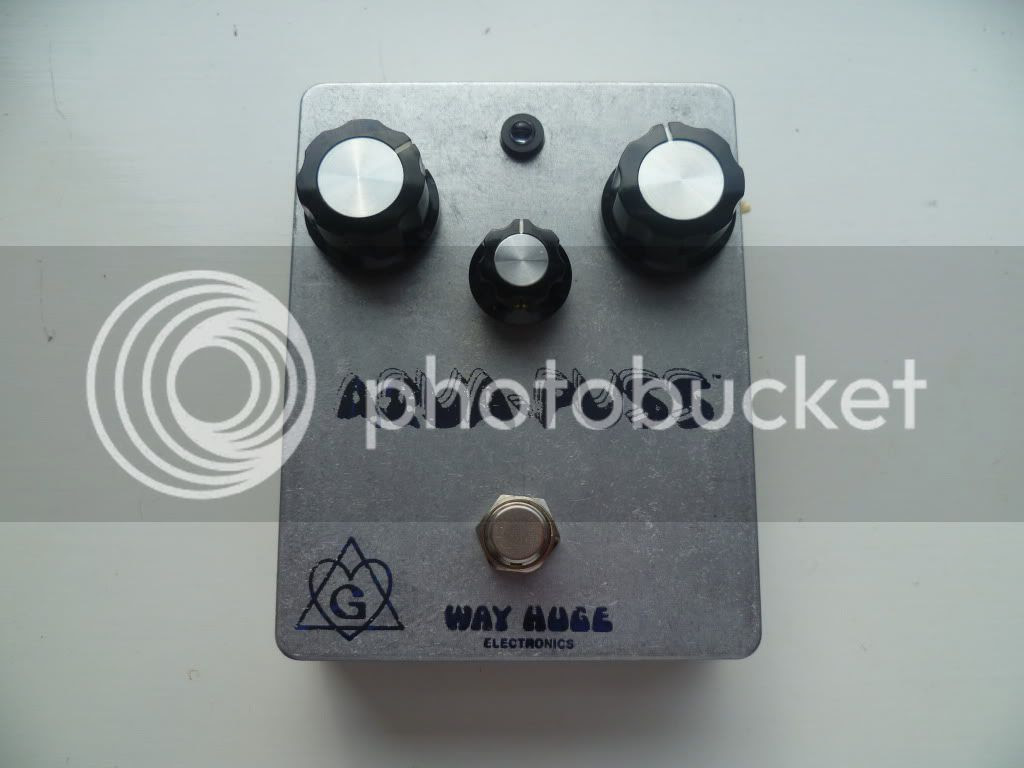 These two sound outstanding, and even with the expensive chips, Ive saved an astronomical amount vs sourcing a MN3005 vintage original.

These were both cheaper to make than buying the reissue too! I might pick up a reissue one day if I see one cheap.

I have started collecting the reissue Way Huge line and will make a post on them soon.

Oh Man Its Been SOOOOOO LOOONG

Hiya readers. I just logged in. I have 36000 hits apparently. Wow. Never would have known.
Ive been building pedals but not documenting it here, so Im going to remedy that.

Hold on your hats for some big updates. Thanks for reading.